Cereal: arguably many childhood mornings summarized in a nutshell. What came with that was also probably grains containing celiac and of course an  insane amount of sugar. One Degree Organic Foods wants you to revisit this part of your younger days with a refreshed look on cereal. 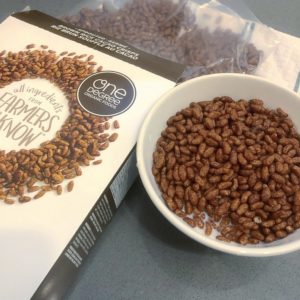 Simply looking at the food packaging at the grocery store, you already know to also make a trip down the dairy (or dairy-alternative) aisle to pick up your favourite kind of milk.  Looking at the product itself, you’re reminded of your favourite cereals. Some of them being puffed rice, or chocolate covered corn puffs, or even cereal marshmallows.  These Sprouted Brown Rice Cacao Crisps takes many of the goods from your favourites and puts it all together! Unfortunately no marshmallows, but thinking long-term, it’s probably for the best.

These rice crisps are definitely crunchy, and that’s something I can appreciate. After adding the crisps and milk into a bowl, I set off to do something else, and the next thing I knew 15 minutes had passed by.  I was convinced that I would have to force myself to eat soggy rice crisps. Reluctantly taking a spoonful, I winced and hoped for the best: the rice crisps were still surprisingly crunchy. 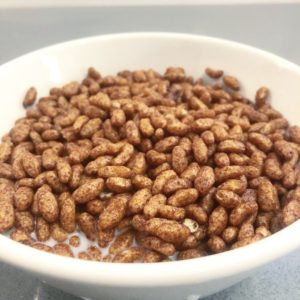 The flavour comes across really delicate: the milk taste came across a lot stronger than the cacao did. It felt slightly underwhelming, but it was a welcome change.  The change in flavour tells me that I wasn’t injecting too much sugar into my system so early in the morning. The cacao, as opposed to cocoa, used in the cereal helps to make this major difference.  While both cocoa and cacao are derived from the same source, their different preparation processes generate different flavour results, including sweetness. So, if I am ever looking for something less guilt-inducing, these would be it.