“Time to have a glass of water handy,” I thought to myself. That water was not needed as I expected. Lemonade Gluten Free Bakery  has worked some magic and created two bread varieties that won’t make your mouth feel like a sandy desert. 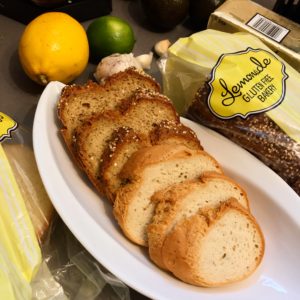 The sourdough is classically sourdough: an unforgiving crusty outside that makes you worry about the inside. But you are surprised with a pleasantness, dampness, and softness within.

As a plain bread with no additions, it is enjoyable– it carries a slight tang that will keep you and your tastebuds interested.  On a texture basis, the consistency is dense, as expected. However, it does not clump and does not fall heavy in your stomach.

Turning the sourdough into a garlic bread, I was surprised. It didn’t fare as well as the Honey Seed, below but still highly enjoyable. The added butter dampened the already moist bread even more, making the butter take on a more runny consistency.

Some breads when toasted get dry and scratchy, and produce too many crumbs to be good for anyone. This toasted sourdough broke that expectation — it was crisp, soft inside, and maintained that signature bread-like chew. 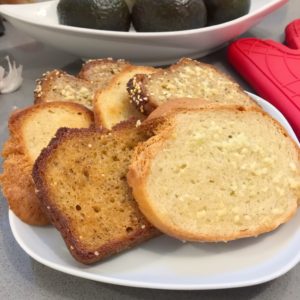 Intrigued by the look, I eagerly took a bite and was surprised by the presence of flavour in the bread.

Now, don’t get me wrong, it wasn’t exploding with flavour, but it had more of a presence than what anyone might be used to.  The flavouring was really baked into the bread: an unforgettable sweetness that sits and lingers on your tongue.

As for texture, it was drier than what I had hoped for. It took me by surprise, and I admit needing to sip on water after a slice. Nonetheless, it was crumbly and soft, but would not recommend eating it on its own. Who does that anyway? Me. Guilty!

As a garlic bread: awesomeness! The texture followed the same as the toasted sourdough. But it was clear this bread was made for something saucy.  What was really fascinating was the mixture of three flavours: honey, garlic, and butter. In other words: sweet, savory, and salty. A marriage made for food.

For foods like sandwiches, which are typically drier, go with the sourdough, it does a good job of balancing that out. For anything else that is often more wet, use the honey seed: it’ll be sure to take on any flavour added to it!