The box may deceive you: there’s plenty of pasta to go around if you cook the whole thing.

Having mixed experiences with penne in general, I journeyed into this experience with an open mind. For me, sometimes a penne can be overcooked and then does not hold texture against the sauce it accompanies. On the other hand, an undercooked penne makes it seem like the chewing will last an eternity. Hardly the case with Explore Cuisine’s Red Lentil Penne. 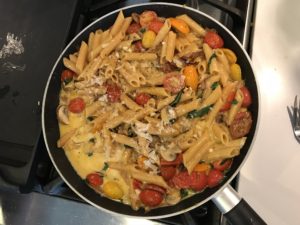 I saw penne and immediately thought: it’s time to make an awesome white sauce to go with this. Not taking too much attention away from the pasta itself, other ingredients included: grape tomatoes, artichoke hearts, cilantro, caramelized onions, and parmesan. The sauce was really simple: butter, garlic, cream, and wine. I’ll leave it to you to imagine the combination of those flavours.

As for pasta itself: relatively tasteless. The good thing about this is that you can cook it just like it’s “ordinary” pasta and not have to worry about making adjustments to accommodate added flavours. Cook and serve, easy as that. 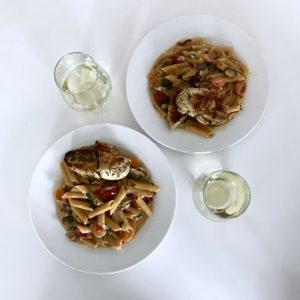 In terms of texture, the pasta was firm, but smooth. It cooked evenly throughout– no bits and pieces that were too hard or too soft. During the first few chews, the pasta holds itself well, and then falls apart in a way that just disappears in your mouth.

The food altogether was filling, but did not leave me feeling stuffed. This was so much the case that I kept going back for seconds.  Safe to say with the help of Explore Cuisine, I performed my first magic trick: vanishing pasta (into my stomach).

Overall, I chose a pretty basic way to make the penne; I really just wanted to explore the pasta at its foundation. The next time I grab a box, I’ll be putting these into a baked penne lasagna.