We just can’t seem to resist the alluring temptations of brownies.  We can lie to ourselves all we want about how we will only eat “just one”.  And sometimes–no, rarely– that’s true. More often than not we can even find ourselves sticking to “just one”– just one bag of brownies. Maybe that’s an exaggeration, but you get the point: they’re irresistible. For those with gluten sensitivity this can be a serious temptation. Dolled-Up Desserts has created an alternative recipe for this classic dessert (or appetizer, depending on which order you eat your food) that almost anyone can enjoy: Bettie’s Brownie 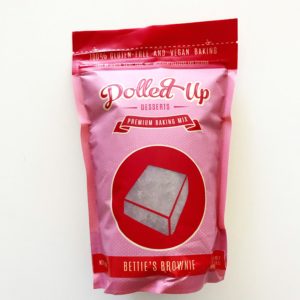 These brownies are basically ready-to-bake (each package comes with brownie mix and ground flax seeds) and you will need to add two additional ingredients:

Within 10 minutes of mixing all these ingredients together you are ready to bake! 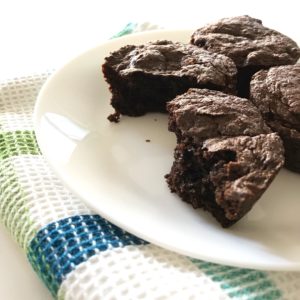 Improvising, I baked the mix into cupcake molds, which seemed to work pretty well aside from the brownies being a little stiff around the edges — as expected.  The brownies took on a nice crisp outer shell that seemed difficult to bite through, but broke apart really easily. After getting into the body of the brownie, it was pure chocolate bliss from there.  The bites were moist, and were baked through evenly. Nothing short of a good brownie.

From a flavour standpoint, it is as expected. While the mix contains almonds, I didn’t notice much of a signature almond flavouring that you can expect to come out.  The flavour itself was just a nice smooth and neutral dark chocolate that gives you a warm hug from the inside. It wasn’t too sweet, nor was the chocolate too “in your face” as some brownies are.  The touch of coconut oil and maple syrup also helped to deliver a balanced flavour.

If I’m ever in a rush, or just want to quickly whip something up when I’ve got friends over, these are what I would need to do the trick.  They’re easy to mix, quick to bake, and taste great. It is also really nice that they come in a form that almost anyone can enjoy.